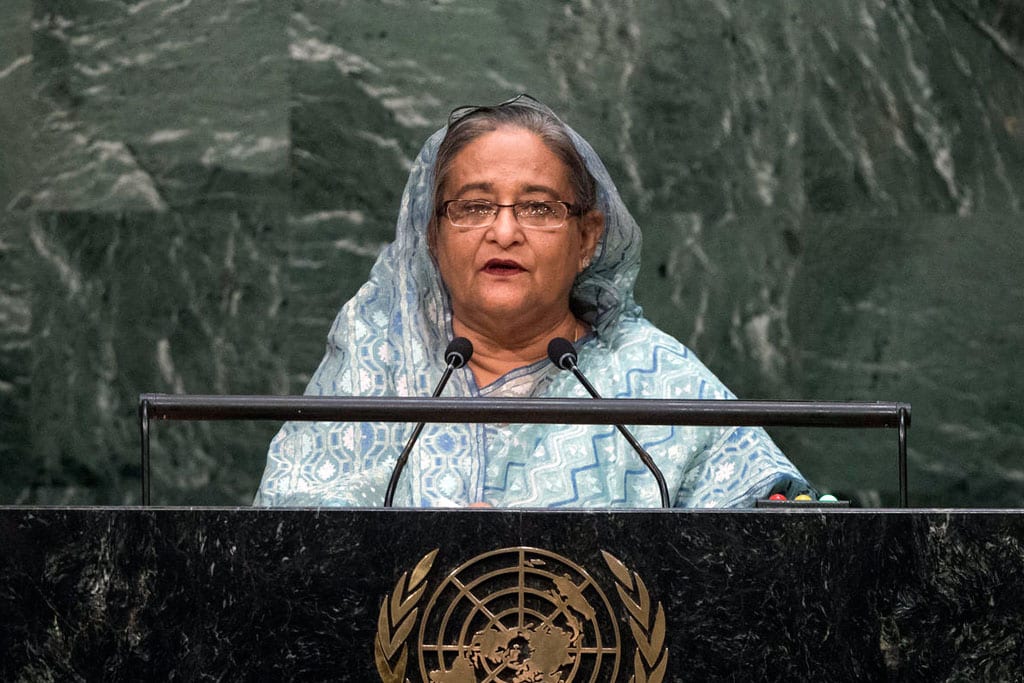 Statement by Her Excellency Sheikh Hasina, Prime Minister of the People’s Republic of Bangladesh.

Mr. President,
As-salamu alaikum and good afternoon.
Let me extend my heartiest felicitations on your election as President of the 72nd session of the General Assembly. My delegation assures you of our full support in discharging your priorities on people, peace and planet.

Mr. President,
This is the 14th time I am addressing the 10th General Assembly. And this time I have come here with a heavy heart. I have come here just after seeing the hungry, distressed and hopeless Rohingyas from Myanmar who took shelter in Cox’s Bazar, Bangladesh. This forcibly displaced people of Myanmar are fleeing an ‘ethnic cleansing’ in their own country where they have been living for centuries. I can feel their pain as I, along with my younger sister, had been a refugee for 6 years after my father, the Father of the Nation of Bangladesh Bangabandhu Sheikh Mujibur Rahman and almost all members of my family were assassinated in 1975.

In 1974, in the first ever address of Bangladesh in this Assembly, my father Bangabandhu Sheikh Mujibur Rahman said, “I know that the souls of our martyrs join us in pledging that the Bengalee nation fully commits itself to the building of a world order in which the aspirations of all men for peace and justice will be realized”. Mr. President, We are currently sheltering over 800,000 forcibly displaced Rohingyas from Myanmar. The ongoing atrocities and human rights violations in the Rakhine State of Myanmar once again aggravated the situation at the Bangladesh-Myanmar Border. Hundreds of thousands of Rohingyas from the Rakhine State are entering Bangladesh to flee violence. As estimated by IOM, in last three weeks over four hundred thirty thousand Rohingyas entered Bangladesh. We are horrified to see that the Myanmar authorities are laying landmines along their stretch of the border to prevent the Rohingyas from returning to Myanmar, This people must be able to return to their homeland in safety, security and dignity. At the same time, I condemn all kinds of terrorism and violent extremism too. Our government maintains a ‘zero tolerance’ policy in this regard. I thank the members of the Security Council and also the Secretary General for their proactive attempts to stop atrocities and bring in peace, and stability in the Rakhine State of Myanmnar.

I further call upon the United Nations and the international community to take immediate and effective measures for a permanent solution to this protracted Rohingya crisis. In this regard, I propose the following actions:

First: Myanmar must unconditionally stop the violence and the practice of ethnic cleansing in the Rakhine State immediately and forever.

Second: Secretary General of the United Nations should immediately send a Fact- Finding Mission to Myanmar.

Third: All civilians irrespective of religion and ethnicity must be protected in Myanmar. For that “safe zones” could be created inside Myanmar under UN supervision.

Fourth: Ensure sustainable return of all forcibly displaced Rohingyas in Bangladesh to their homes in Myanmar.

Fifth: The recommendations of Kofi Annan Commission Report must be immediately implemented unconditionally and in its entirety.

Mr. President,
In the 1971 war of liberation, we endured an extreme form of genocide. In the 9-month- long war of liberation against Pakistan 3 million innocent people were killed and more than 200,000 women were violated. The Pakistan military launched the heinous ‘operation searchlight’ on 25th March which was the beginning of the 1971 genocide.

The 1971 genocide included targeted elimination of individuals on the ground of religion, race and political belief. The intellectuals were killed brutally. To pay homage to the victims of the genocide, our national parliament has recently declared 25th Mm-ch as “Genocide Day.” In Bangladesh, we have already undertaken the daunting task of bringing the key perpetrators to justice through the International Crimes Tribunal. I urge the international community to take collective actions to prevent recurrence of such heinous crimes anywhere anytime. I believe, recognition of past tragedies like the 1971 genocide would guide us to achieve ‘never again’.

Mr. President,
Since our birth as a nation, we have pursued peace-centric domestic and foreign policies. With that spirit, Bangladesh has been taking the lead in tabling the resolution on “Culture of Peace” every year in the General Assembly since 2000. We reaffirm the call for resuming the Middle East Peace Process, and for ending all forms of hostilities and discriminations against the brotherly Palestinian people. In recognition of the potential role of the UN peacebuilding architecture, we look forward to bold and innovative proposals from the Secretary General on financing for ‘sustaining peace’. I am pleased to announce a token contribution of USD 100,000 from Bangladesh for the UN Peacebuilding Fund (PBF).

Mr. President,
As a major troop and police contributing country Bangladesh underscores the importance of upholding effectiveness and credibility of UN peacekeeping operations. We shall maintain our own capability readiness, remain open to further smart pledges, enhance the scope of our peacekeeping training, and deploy more female peacekeepers. We maintain a ‘zero tolerance’ approach to any allegation of sexual exploitation and abuse. As an endorser of the “‘Voluntary Compact” on Sexual Exploitation and Abuse, I have committed myself to the Secretary General’s “Circle of Leadership” to combat this scourge. I am also pleased to announce a token contribution of USD 100,000 to the Victim Support Fund established for this purpose.

Mr. President,
Terrorism and violent extremism have become a major threat to peace, stability and development. Terrorists have no religion, belief or race. Having been a target of a number of terrorist attacks myself, I personally empathize with the victims of terrorism and appreciate their need for protection. We denounce the use of religion to justify violent extremism. I have involved families, women, the youth, the media and religious leaders at the community level to offset the spread of violent extremism. In this regard, I reiterate my calls:

I also urge the UN to address the growing threats emanated from the cyber space to
prevent money laundering, terrorist financing and other transnational organized crimes.

Mr. President,
We believe in promoting safe, orderly and regular migration. Last year we proposed developing a sound migration governance framework through the “Global Compact on Safe, Orderly and Regular Migration”. I am pleased that currently the UN is delivering on the formation of the compacts for migration and refugees.

Mr. President,
The Paris Climate Agreement remains our bastion of hope for climate justice. By recognizing the climate vulnerability, we are building resilience against the grave impacts of climate change. We believe in the potentials of’ “Blue Economy” in advancing the conservation and sustainable use of the ocean and seas. Bangladesh has achieved exemplary success in building resilience against flood and other disasters. Crop intensification and invention of water resistant crops have helped us achieve self sufficiency in food. We have efficiently responded to the massive flood that has stricken the entire south Asian region this year. As a member of the High-level Panel on Water, I attach high priority to implementing its comprehensive Action Plan. Bangladesh has ensured access to safe water for 87 percent of its population by 2015, and we aim full coverage o four population by 2030.

Mr. President,
We believe that there are close interfaces between peace & stability and development. We share the conviction that addressing poverty, hunger, illiteracy, unemployment and inequalities is crucial for building peaceful, just and inclusive societies. We are committed to implement the SDGs. For that, our Government has adopted a ‘whole-of-the-society’ approach. The SDGs complement our vision to transform Bangladesh into a middle-income country by 2021 and a developed one by 2041. Even before the adoption of the SDGs we have initiated unique social programmes that reflect the themes of the SDGs, such as Ekti Bari Ekti Khamar (One Household One Farm); Community Clinic; Ashrayan (Shelter project); Digital Bangladesh; Education Support; Women Empowerment; Education for All; Social Safety Net; Environment Protection and Investment and Development. Our “Voluntary National Review” presented to the UN this year showcased our progress and commitment for achieving the SDGs.

Mr. President, In 2016-17, Bangladesh’s economy posted a GDP growth rate of over 7.24% and our foreign currency reserve reached USD 32.1 billion. We have brought down the poverty level from 56.7% in 1991 to 23.2% today. Our per capita income is expected to grow to USD 1,602 by the end of the current fiscal year, which was only USD 543 in the FY 2005-06. Our life expectancy increased to almost 72 years. These figures, indeed, are indications of our inclusive development, in which no citizen is left behind. To ensure inclusive growth, promote investment and employment opportunities for all, we have taken an initiative to develop 100 special economic zones around the country. Our extensive social safety net measures give coverage to many vulnerable segments of our population, including elderly people, persons with disabilities, victims of domestic violence, and vulnerable mothers under economic hardship. Special emphasis has been given to unlock the potentials of physically challenged children and people. 103 service and care centres along with 32 mobile therapy vans attend to the needs of persons with disabilities, including those affected by Autism. 18,500 community health clinics are being complemented by medical services through mobile phones and web cameras in districts and upazilas (sub-districts). There is now a public primary school in every village of the country. 38,331 educational institutions have been equipped with digital laboratories and multi-media classrooms. Special emphasis is being given on promoting technical and vocational education and training for young people.

Mr. President,
Our youth are the main movers in realizing my vision for a knowledge-based ‘Digital Bangladesh’. We are working towards creating an environment to allow them to pro’sue transformative education, find decent jobs, and turn into truly global citizens. I am happy to announce that Bangabandhu Satellite-1, which is our first ever satellite, is scheduled to be launched this year on our victory day 16th December.

Mr. President, To conclude, I would like to say, we do not want war. We want peace. We want people’s wellbeing – not destruction of humanity. We want sustainable development. Let this be our collective goal. 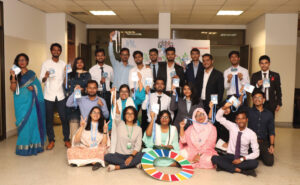 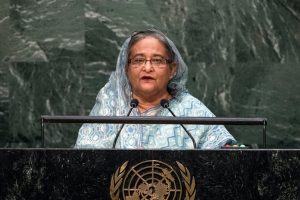 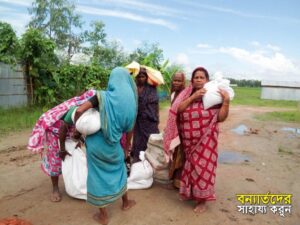